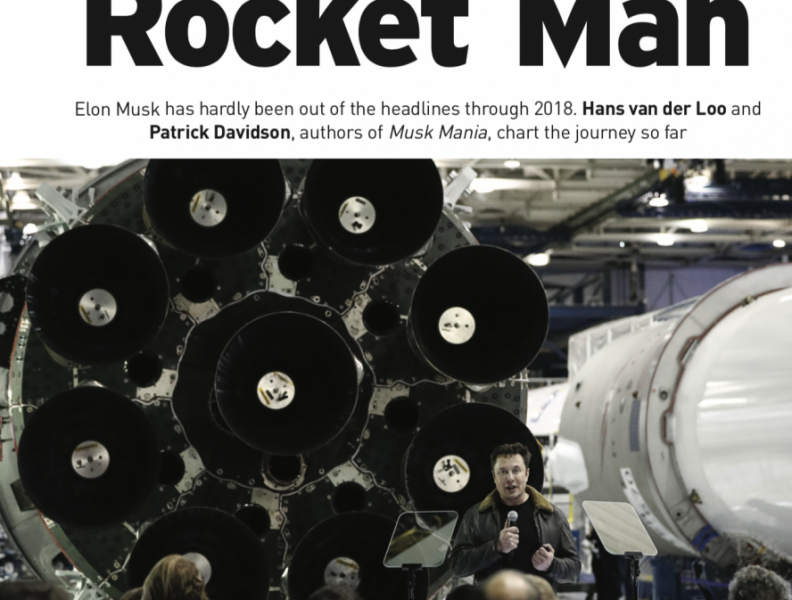 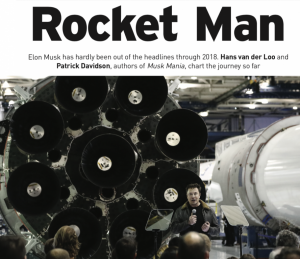 Elon Musk has hardly been out of the headlines through 2018. Hans van der Loo and Patrick Davidson, authors of Musk Mania, chart the journey so far

Elon Musk’s life reads like a three-part book for boys. It begins with his ‘flight from Africa’. After a difficult
, Musk leaves South Africa at age 17. Nearly broke, he travels to Canada and leaves for the United States a little later. There commences the second act of his life story, the ‘flight forward’. After his studies, he makes millions as a fledgling entrepreneur in Silicon Valley. The third act is the ‘flight upwards’. Literally and figuratively. Musk conquers space, but also works away on solutions in the field of sustainable energy.

Elon Musk was born on 28 June 1971 in Pretoria, the eldest in a family of three. Mother Maye, once a contender for Miss South Africa, runs a dietary practice while father Eroll owns an engineering company. The family does well financially but when Elon is six years old his parents decide to separate. Maye leaves with the children for the holiday home in Durban. Two years later, Elon makes the surprising decision to move back in with his father.

South Africa has a strong macho culture, one of tough guys with big mouths and typical male mannerisms. There is no room there for a dreamer with a nerdy look. The young Musk is also a classic know-it-all who corrects everyone. It doesn’t endear him to his peers; he’s teased and regularly beaten up. It’s no wonder he later described his youth as ‘non-stop horrible’.

From a young age, Musk was an introvert thinker and dreamer. Was he already a doer? Not at school, according to teachers and classmates. He may have been smarter than the rest, but does little with those smarts.

This changes when, at age nine, he sees a computer in an electronics store.

His new hobby also gives him his first financial gains. At age 12, he sells the software of his first videogame to a magazine. It earns him $500.

Even in his early teens, Musk dreams of leaving for the States, the land of boundless opportunity. As his mother is of Canadian descent, that country becomes a first stop. He knows of a vague great-uncle in Montreal, hops on a plane and hopes for the best. On arrival, his great-uncle has turned out to have moved long ago. With no more than $100 in his pocket, Musk has only himself to rely on. Through scattered relatives all across the country, he finds shelter and several badly-paid jobs. When his mother, brother and sister also decide to travel to Canada, the family is reunited in Ontario, where Elon enrols at university.